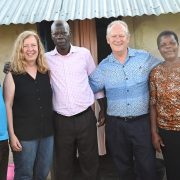 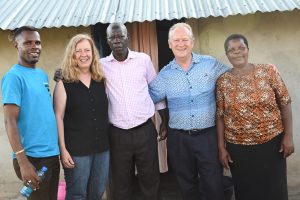 The Founder Goat Foundation, Steve Down, his wife; Coleen Down- while visiting Bondo

The first time we decided to travel 300 kilometers away from Nairobi, Kenya’s Capital we did not know what to expect. We were a small team of 6 people trying to preach about Cause Capitalism to strangers who thought “Who are these people again?” Small beginnings can be very discouraging, especially for start-ups, but we stood our ground on changing the world with what we now believe is a revolutionary way of business operations.

Bondo is a small fishing town that lies in the Western part of Kenya. A small center with vibrant and welcoming people. We arrived late in the evening to witness the economic activities that take place around the markets in the areas. Women were selling fresh produce across the roads while men used motorcycles to ferry passengers across. It is easy to notice fish is a major delicacy in the area as most open markets had it in plenty.

From afar, Bondo looks like a township without hurdles but poverty in the area is evident when civility ends in the town center. Deep in the rural areas, grass thatched huts stand far from each other. Almost every household we visited had a graveyard. Families with very young children and elderly caretakers who were left behind. HIV/AIDS in the region remains a menace that has left many widows and orphans at the mercy of the government.

Widow groups in the region are common. At the shores of Lake Victoria, we met a group of women preparing a boat to set out to fish. It is uncommon for women to take part in such labor-intensive activities but the women around Bondo have been left with no option as they are the sole breadwinners.

“We started a widow support group to prevent more deaths,” said Akinyi, one of the widows in the group.

She added, “ Here if you do not have a husband, you cannot own land. So most widows are forced to remarry. A woman whose husband died has no voice. We have lost so many widows to wife inheritance. They get married as second to fourth wives, then move in with children from their previous marriages to their new homes. Only to die from HIV/AIDS. Some are forced to give their bodies to some of these fishermen to get fish to sell in the markets.”

True to this, The United Nations Human Settlement Programme report indicates that ‘ There is a pervasive sense of women’s powerlessness in the face of profound gender discrimination. For example, women who are barely able to act in their own interests to prevent threats to their land rights. Even very elementary measures, such as consulting local authorities or educating themselves as to how the land office works, seem beyond their capacity. Widows appear isolated and dependent on information from men whom they do not even trust. Due to their place in society as well as lack of social capital, generally, women are unable to address land problems. Many widows whose brothers-in-law, don’t maybe give them enough land especially those with HIV. It is possible that a woman may refuse not to be inherited then the brothers-in-law decide to take the piece of land.’

The Goat Foundation found out that widows in Bondo are among the most discriminated against in Kenya. They are powerless when it comes to land inheritance and property ownership. With very low literacy levels, they can only start out ventures that feed their families on a daily basis. This inhibits wealth creation in the region as income goes directly to catering to basic needs.

On July 19th, 2022, we made follow-up calls to some of our widow beneficiaries in the region. We are happy to announce that our giving hope by giving goats initiative has enabled 25 low-income widowed households in the area.

When we started out, we thought about the immediate needs and pleas of the widows. But we came to the conclusion that a long-term sustainability model that addresses wealth creation was the only way to narrow the inequality gap.

Most widows have happily responded that their pair of goats have reproduced and they are actively looking for markets to sell them.

“I have 6 children. When you last visited, I did not know how I was going to put 3 of my children through high school. I am so happy because my goats reproduced after 5 months and I have been able to sell them and raise school fees for them. It has not been easy but it has been possible.” Says an elated Ruth Oginga.

After Bondo, we have been able to give 500 more goats to households across Kenya. Watching Cause Capitalism impacts households has been fulfilling. Believing that such a small token can go a long way in giving hope to families that had been despaired by demise has been the fuel to our ambition to grow The Goat Foundation.

Our journey to empowering 10,000,000 more households across East Africa continues. 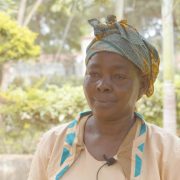 ” The rains in Kitui have become short and unpredictable. Look at how crops are wilting on farms and how the earth is cracking. It is dry and to us farmers, this period has been chaotic. “says a distraught Joyce.

Like the 100 beneficiaries who received seed capital of 2 goats, Joyce is happy to have her pair. The region she hails from is categorized as part of the larger Arid and Semi-Arid areas in Kenya. Owing to climate change, the nature of Joyce’s business demands her to close shop.

” I am a farmer dependent on rainfall. If there is no rainfall, I cannot eat. I am also a widow with 5 children to feed. In our small table banking group, we converge with many other widowed women and 1 man to pool resources for economic productivity. The past few months have been hard, we have tried chicken farming and learned how to produce chicken feed from our gardens but still, the high cost of production does not allow us to fully delve into it. We started this group a few years ago when we realized the pain points of single-headed households.” Says a confident Joyce.

“Most widows are chased away from their matrimonial homes after they bury their husbands. They bear the burden of sole provision while they have no jobs. In our group, for example, some women dropped out of school. They do not have secondary school certificates leave alone credentials that will give them jobs. So, they opt to remarry and a few lucky ones start businesses.

Joyce gazes far into the horizon, lost in thoughts as if she was trying to picture the sudden curve her life had taken after her husband’s demise. Her face lightens up with new energy and she bursts out;

“This self-help group has uplifted many women around this area. Now that we have all received a pair of goats from The Goat Foundation, we are going to pool resources after our goats reproduce and start a proper lending system in this area. We are targeting widowed households. After selling the goats we should be able to raise capital for a start. This money will go into lending widows’ capital to start their businesses. We will teach them how to be entrepreneurial and in the spirit of cause capitalism ensure that we buy from their businesses too.”

Cause capitalism as a wave of change in business operations across Kitui.

The Loomba Foundation attributes widow poverty to an immediate loss of income that tips widows and their children into poverty, as well as deepening the poverty of families already on low incomes. To mitigate this, widows have been identified as a vulnerable group in need of empowerment.

Joyce Tabitha says her group’s vision was brought after The Goat Foundation’s CEO spoke about cause capitalism. He taught them a viable model for business operations that is symbiotic and guarantees long-term success.

The self-help group has pledged to empower and educate other widows on the benefits of self-reliance.

“As goats reproduce two times in a year, we will take the second set of kids and nurture them then sell. The first will be given to other widows as a continuing practice of cause capitalism. From selling, I assure you now widows in Kitui in the next 5 years will go to bed hungry or cry about school fees.

I have never witnessed such a project and I want to thank Steve Down and The Goat Foundation for thinking about widows. From Kitui, we say Asante sana.”