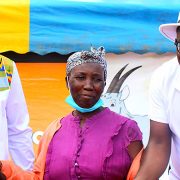 During the 2007 post-election violence in Kenya, hundreds of lives were lost and thousands got displaced from their homes. The disputed elections were contested by leaders from the two of the largest communities in the country.

As tension rose around the country and violence grew at an alarming rate, Joyce was advised by concerned friends to move back to her rural home in Murang’a, Kiambu County, from where it was assumed her security was guaranteed.

Leaving her two children behind was one of the hardest decisions she ever made. She figured they were safer staying in one place, rather than traveling around in those unpredictable times.

While in Murang’a, her husband sadly passed on in a complicated story that requires a book to detail. 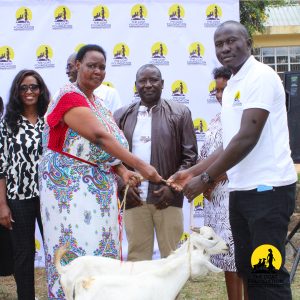 Donating a pair of goats to widows

Joyce recalls how she was verbally attacked and kicked out of her husband’s funeral by her in-laws who thought she had visited their home to claim his property. In truth, she had braved danger and uncertainty to travel across the country to collect her children.

“What are you doing here? Why did you come? don’t you know your people killed my brother!!??” he fired off in a staccato of ruthless ire that made Joyce recoil from his presence in sheer horror.

“You think we don’t know your agenda?” she had been told, “you will get nothing from my dead brother. His property belongs to us, his children are ours, leave before you follow him to the grave.”

Scared out of her wits, her instinct of self-preservation had made her flee that home and city never to return.

In Machakos County, sad and confused, she settled at a nearby market center known as IIyuni where she worked as a cleaner at a local school and tended to a small farm around the house that she rented.

Through her church, Joyce learnt about The Goat Foundation. Her pastor had presented her name for consideration as a likely recipient of a pair of goats.

Excited and intrigued Joyce attended the ceremony and was touched by the speeches exhorting generosity.

“Why should I act generously yet I am just a poor widow, shouldn’t I save all my money?” she wondered.

However, after deciding to adhere to the simple instructions of giving as spoken by donors at the meeting, she began offering herself to assist in church, buy meals for guests and even clothe a destitute child. She also donated the kids to her goats after they gave birth.

What followed was a series of miracles that bring tears to her eyes whenever she remembers.

In a chance encounter with a family lawyer during a revival meeting, Joyce was advised of her rights concerning the custody of her children was concerned. Fellow church members got wind of her plight and got together to fundraise and hire a lawyer for her.

Meanwhile, as her goats grew in number, she decided to try her hand at the restaurant business.

It is now three weeks since the custody hearing concerning her children began. Joyce believes good tidings await her.

At the moment, she has to prepare for a meeting with an investor who wants to expand her hotel to a storied structure offering 3-star services.

“So this is what giving is all about?…you give to receive!” she muses smiling.