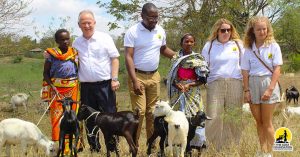 Through socioeconomic support of widows, cause capitalism partnerships to initiate actions to eradicate inequalities.

The Goat Foundation interacts with widows from impoverished communities across Kenya on a regular basis. From our observations, it is apparent that great economic disparities exist among members of Kenyan societies.

Looking objectively, we realize that outcomes of economic disempowerment lead to the loss of basic human rights, particularly for widows. It is for this reason that our efforts are focused on the provision and enablement of sustainable economic solutions for Kenyan widows.

It is a documented fact that historically, women faced social and economic disadvantages in African societies. It, therefore, portends a greater threat to their livelihood when women become widowed, especially as is common, while they are still relatively young.

A moral conundrum facing the world today is the abject poverty surrounding the lavish display of opulent wealth. This was so much that the Chinese nation banned social media influencers from airing wasteful food sampling episodes.

Many rich however feel justified to wallow in their excesses as was the case of Amazon founder Jeff Bezos who took a 90-minute flight to the edge of space at a cost of nearly $100 million while the world reeled in the midst of a pandemic and poor less than 5% of African populations had yet to afford the Covid 19 vaccine.

Eradicating poverty in all its forms and dimensions is an indispensable requirement for sustainable development. To this end, there must be the promotion of sustainable, inclusive, and equitable economic growth, creating greater opportunities for all, reducing inequalities, raising basic standards of living, fostering equitable social development and inclusion, and promoting integrated and sustainable management of natural resources and ecosystems.

To be fair, most well-to-do families contribute to charitable causes and are participants in various philanthropic endeavours.

However, as much as individual effort goes towards donations and funding noble cases, very little progress was made toward raising the living standards of the majority of the world’s population.

Evidence-based solutions such as the donation of two goats to widows provide sustainable solutions to poverty eradication.

In general, technological progress, commercialization, and economic development are factors leading to rises in inequality.

Another major cause of economic inequality within modern market economies is the determination of wages by the market. Where competition is imperfect, information is unevenly distributed. opportunities to acquire education and skills unequal, a market failure results. Since many such imperfect conditions exist in virtually every market, there is in fact little presumption that markets are in general efficient.

Faceless multinational corporations have moved to the least developing nations where regulations are lax.

Variation in individuals’ access to education is key to income inequality. Education, especially in an area where there is a high demand for workers, creates high wages for those with this education.

An inverse link between income inequality and social cohesion. In more equal societies, people are much more likely to trust each other, and measures of social capital (the benefits of goodwill, fellowship, mutual sympathy, and social connectedness among groups who make up social units) suggest greater community involvement.

Oxfam asserts that worsening inequality is impeding the fight against global poverty. A 2013 report from the group stated that the $240 billion added to the fortunes of the world’s richest billionaires in 2012 was enough to end extreme poverty four times over. Oxfam Executive Director Jeremy Hobbs said that “We can no longer pretend that the creation of wealth for a few will inevitably benefit the many – too often the reverse is true.”

When inequality is associated with political instability and social unrest, rent-seeking and distortive policies, lower capacities for investment in human capital, and a stagnant domestic market, it is mostly expected to harm long-run economic performance, as suggested by many authors.

The challenge for policymakers is to control structural inequality, which reduces the country’s capacities for economic development, while at the same time keeping in place those positive incentives that are also necessary for growth.

The potential for improving the lives of poor people by finding different ways of distributing current production is nothing compared to the apparently limitless potential of increasing production.

A study by OECD makes a number of suggestions to its member countries, including:

Progressive taxation reduces absolute income inequality when the higher rates on higher-income individuals are paid and not evaded, and transfer payments and social safety nets result in progressive government spending.

Wage ratio legislation has also been proposed as a means of reducing income inequality. The OECD asserts that public spending is vital in reducing the ever-expanding wealth gap.

Economic inequality leads to political inequality and the beneficiaries of the economic system that gave rise to this inequality are unlikely to implement correction mechanisms.