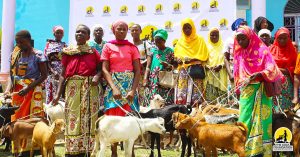 Under the sweltering heat of the afternoon sun on the Kenyan coast, an eager crowd gathers outside a church. Most community meetings take place here. However today, they are here for a different kind of engagement. The congregants were selected for a relief program by a philanthropic organization known as The Goat foundation. The founder of this pioneering venture is due to arrive shortly and tension is palpable. Times have been hard of late, and as the drought persists most villagers are facing starvation and malnutrition. Assistance in whatever form is literally a lifesaver. From a distance, a dusty convoy of three cars snakes its way slowly toward the village. Two pick-up trucks and a Toyota LandCruiser come to a halt outside the church. The crowd surges forward. Steve Down, the Founder, and CEO of The Goat Foundation steps out of the Toyota four-wheel-drive vehicle and walks purposefully toward church elders and a raft of community leaders. Mr. Steve Down realizes the crucial role played by these leaders. Local leaders help identify the most vulnerable members in need of immediate help. The waiting list for recipients is usually long and logistical planning and organization play a crucial role in the success of this project. Mr. Down exchanges greetings with most of the assembled crowd while nearby at a  makeshift stand some officials from his organization are busy sorting out the names of the beneficiaries of this program.

Each family receives a male and a female goat, that hopefully will procreate and enlarge the herd while providing milk for drinking. These goats have been sourced from businessmen within the community. This ensures that the project benefits both the recipients and local businesses. Mr. Steve Down smiles and chats with the locals, feeling quite at home in a remote village thousands of miles from his hometown in Utah USA. 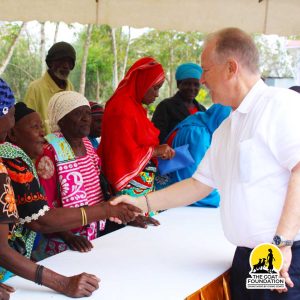 The Goat FOundation Founder, Steve Down greeted one of the widows joyful to be part of the beneficiaries in the giveback.

His affability and charisma are infectious, and you are left with little doubt that Mr. Down holds a deep conviction about his purpose here.

A member of his staff is scheduled to conduct a brief financial literacy class. Most recipients of these donations need training on how to utilize the animals they receive in wealth creation. This is one of Mr. Down’s proudest achievements. Whenever he comes back to visit a previous recipient of his donations, he is always amazed at the transformative improvement in the fortunes of those who made the effort to apply his financial literacy skills.

Steve is also the founder and CEO of Financially Fit, a for-profit company in the Finance Education industry that offers financial literacy through personal wealth education. As a Cause Capitalist, he founded The Goat foundation, through which he donates 1% of Financially Fit’s earnings towards poverty alleviation by donating goats to the needy in society.

Today Steve is witnessing the fruition of his vision created under the Cause Capitalism philosophy. The philosophy surrounding this concept blends philanthropy, entrepreneurial spirit, corporate social responsibility, and capitalism ideals into a mission whose purpose is to help the less fortunate members living in the surrounding community where his business was located. with a deep sense of purpose. Simply put, Cause Capitalism is where a for-profit business company agrees to partner with a non-profit organization and donates a percentage of its gross sales to the non-profit.

Soon crowds begin to gather as other villagers noticed the presence of visitors. Every eye turns towards him. Apparently, they expect him to give a speech. Well, this was unplanned, Steve chuckles to himself as he turns to the church Reverend sitting on his right. The deeply lined face of the priest nods in a smile urging him to speak to the crowd.

Steve is aware that a lot still needs to be done, and as he walks back towards his vehicle to depart, his normally serene features harden in a steely determination with another resolve to help more people.