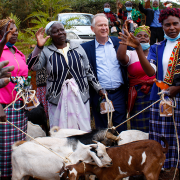 Steve Down’s companies are all founded on his philosophy of Cause capitalism. He argues against the doctrines of capitalism by fronting a gentler, compassionate and rewarding model. Cause Capitalism according to the Financially Fit CEO is when a for-profit company partners with a non-profit organization; not as a gimmick but as a true sustainable partner. In achieving the UN’s Sustainable Development goal of No poverty by 2030, it is necessary that profits generated by for-profit companies serve the communities they are within.

Throughout Sub-Saharan Africa, Poverty remains the biggest economic challenge in achieving economic equality. By 2015, 80% of the world’s poorest came from the region. It does not help that climate change equally continues to widen the wealth gap as the most vulnerable populations have been exposed to hunger from prolonged dry spells. Most of the countries in Sub-Saharan Africa fully depend on agriculture for a living. With the unpredictable rainfall patterns’ that the region currently experiences; women and children are most at risk of facing the pangs of food insecurity.

The factors above contribute to income inequality that requires global solutions. One of Steve Down’s companies has partnered with The Goat Foundation, a non-profit organization that reaches out to low-income households in the most rural parts of Kenya to address by teaching wealth creation. The charity-based organization has experienced robust growth since its inception and has 450 beneficiaries across Kenya.

The binding vision for The Goat Foundation is to ensure low-income households have income-generating activities that will enable them to cater for themselves financially.

Steve Down says he was inspired by the story of a young widow whom he first met while visiting Kenya. She had just lost her husband and at the time, she had no reliable source of income. With children to fend for he wondered how she was going to survive. As the members of the community contributed to the woman’s husband’s proper send-off, Steve noticed no one talked about contributing to the young family’s future.

He then asked one of the attendees what he can do to ensure the woman is self-sufficient.

“Only 2 goats will keep the widow’s children in school!”

Steve Down was shocked that a small family would only need $100 to sail them through life normally. He thought about the families that are forced to sacrifice education for their children because they cannot afford it and the disadvantaged women are left without any inheritance and knowledge on wealth creation. It is then that The Goat Foundation became a solution for poverty alleviation in rural communities.

By 2025, The Goat Foundation envisions to have reached 10,000,000 low-income and vulnerable widows in East Africa. The gift of 2 goats; a male and a female should give widows a chance to partake in wealth creation.