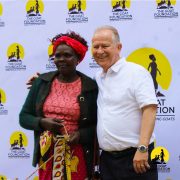 On Saturday the 23rd of April 2022, The Father of Cause Capitalism and Founder of the Goat Foundation Steve Down lead the team from The Goat Foundation in donating 200 goats to 100 widows in Mnarani Ward, Kilifi county, Kenya. The donation which targets to propagate his vision of Cause capitalism where for profit companies should choose non profit organizations not as a gimmick, but as true sustainable partners across the world seeks to ensure vulnerable widows in the community have an equal chance to wealth creation. Speaking to the media, Mr. Down said that his vision for The Goat Foundation is to reach out to the most vulnerable populations that contribute to nation-building but have limited to no wealth creation tools.

” Every person deserves a chance at wealth creation, and we are here to ensure that we provide these opportunities to the most vulnerable and marginalized communities.” said Mr. Steve Down.

In rural Africa, one in ten women above the age of 14 is widowed. At this young age with no self-sufficiency skills and children to cater to, they are vulnerable to many socio-economic challenges including sexually exploitative practices. According to research conducted by one of Kenya’s leading university, Kenyatta University, Kilifi county records the highest prevalence of child marriage at 47.4%. True to this, some of the widows who benefitted from The Goat foundation’s donation stated that they dropped out of primary school and resorted to early marriage.

“We take care of widows across low-income households because they fall under marginalized groups,” said Mr. Steve Down.

When widowed at a young age, they are left with the burden to care for their young families. While some resort to agriculture for provision, others choose prostitution or are inherited as wives to older men.

Majajani area in Kilifi county in Kenya is among the poorest areas in the region. Characterized by poor infrastructure, long dry spells, water shortage, and early marriages. Goat farming in the area is believed to be exclusively for the fairly wealthy. A gift of goats to this community is to ensure the widows have equal opportunity in wealth building.

To strengthen the local capacities of stakeholders to reduce the near-, medium- and long-term vulnerability to current and future climate variability, The Goat Foundation targets to reach out to 10 Million widows in East Africa by 2025. The gift of goats will ensure populations that were previously fully dependent on agriculture will not be affected by climate change as they can adjust to learning new and smart farming methods.